Backstage
by Waiting For Callback

Hon: What’s your process of preparing for an audition?

Ella: Get there early

Hon: You’ve got your sides now how do you go about understanding a character?

Asa: Figuring out who they are, what's motivating them. You need to understand them like you would a good friend, their physicality, their characteristics. Break down the similarities and differences between yourself and the character.

Ella: A really useful way to break down a scene for an audition is to decide WHY your character is saying each line. eg, 'Here, I am trying to intimidate', or even more clearly 'I hope', 'I persuade', 'I rationalise'. I then break down the scene into sections and think about WHY the casting director has sent me those specific scenes, what they want to see.

Hon: What's the hardest thing about the audition process?

Ella: Most predominantly, the rejection. But that's the obvious one. Taking direction mid-way through the audition after you've rehearsed it a certain way, this is why it's important not to over think too much leading up to the day. If you let yourself get set in your ways, you have no room to play around and try new things in the room. The director wants to see you are able to adapt, they're constantly throwing you curveballs!

Hon: Can you tell what the casting director's thinking?

Ella: Absolutely not! I've had auditions where the casting director has yawned throughout and offered absolutely no feedback, then had a callback the very next day! If you're in the room for a long time, making people or laugh, or benign asked to do it a multitude of different ways or with different actors- they're probably interested in you. Asides from that no good will come from overthinking their every word!

Asa: They're still gonna say 'Well Done' and 'Thank You' at the end no matter how bad it was!

Hon: How did you get into acting?

Asa: I started going to the Young Actors Theatre, in Islington when I was 7 years old. I joined the agency there, a casting director saw me in a class one day and asked me to audition for The Boy In The Striped Pyjamas and I got the part. However, It wasn't until I was about 13 that I realised acting could be a career for me.

Hon: I knew the answer to that one! (oooo look at my knowledge) Asa and I were both at YAT together. 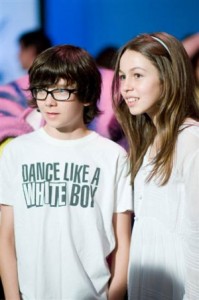 Disclaimer: I’d like to make it clear that I am in costume as Alice in Wonderland in this photo not just randomly dressed like that…

Thanks both and good luck with the new film! x